Yesterday, at the ITU’s Plenipotentiary’s Sunday session, the Working Group of Plenary’s Ad Hoc Group on Internet-related resolutions agreed to remove the most controversial of proposed changes to ITU’s resolutions. You know the ones – the proposals have been  causing some in the Internet governance community, the media and a small smattering of Member States to flap about, telling anyone who’d listen, “OMG, the ITU’s about to take over the Internet!”

So, in today’s non-news, let me summarize what ITU Member States have not resolved to do in the Internet-related Ad Hoc Group: 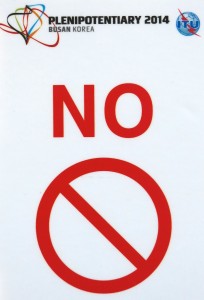 1. ITU is not going to re-engineer the Internet. What has become known simply as “the Indian proposal” was not adopted by Member States. Instead, the Chair of the Ad Hoc Group on Internet-related resolutions will read a statement during the Working Group of Plenary today explaining that the proposal is not going forward as a resolution, but that the Ad Hoc Group welcomes approrpriate forums taking up the issues raised by the proposal.

2. ITU is not going to mention mass surveillance, or attempt to protect State sovereignty from unlawful surveillance at the international level through the development of international Internet-related public policy. In fact, the words “surveillance” and “privacy” are not going to appear anywhere in the four main Internet resolutions, 101, 102, 133 or 180. Despite this being the first big ITU conference since Snowden’s revelations, attempts to raise surveillance and privacy issues in Resolution 101 and 102 crashed and burned.

I’ll blog about why these things happened later, but for now, I thought folks just might like to keep up to date with what isn’t happening at ITU Plenipotentiary.