Note: I am attending the ITU Council 2014 meeting as a member of the Australian delegation; however, any of the views I express in this blog post are entirely my own. This post does not reflect the official Australian position, nor is its content endorsed in any way by the Australian government. 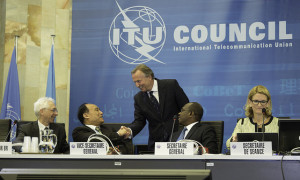 Some of key quotes from Day 1

“There is no beginning and there is no end. There is only change.”—Chair of ITU Council 2013, Catalin Marinescu (Romania)

“One of the Secretaries General of the Union, Mr Mohamed Ezzedine Mili, described the Internet as an explosive marriage between the computer and telecommunications. If we are not careful, those of our people who have difficulty reading and writing may be left by the wayside.”—Chair of ITU Council 2014, Aboubakar Zourmba (Cameroon)

“The Dubai Declaration recently adopted at the WTDC-14 describes telecommunications and ICT infrastructure, services and applications as powerful tools for economic growth and innovation. This is true of course, and yet, infrastructure, services and applications will not foster innovation and from that, economic growth, if innovation is hampered in other ways. Governments cannot legislate innovation, but what we can and should do is make it much easier for businesses in our countries to innovate.”—Australia’s Minister for Communications, Malcolm Turnbull 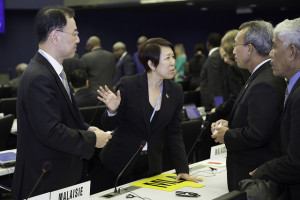 Summary of the most interesting topics (to me) on Day 1

ITU must have one of the best PR and marketing departments of any organization I’ve ever come across. Instead of making participants of ITU Council 2014 sit through a really long read-through of the summarizing this 82-page report, the media folks at ITU put together a slick and glitzy video highlighting ITU’s major achievements over the past few years. The technical bodies of the Internet governance world could certainly learn a thing or two from ITU about producing videos that highlight key achievements in such easily digestible forms. (In contrast, take a look at how the Internet governance world fails to effectively communicate what it’s doing, and manages to confuse many of its own true believers here.)

2. ICTs and people with disabilities

This really is low hanging fruit issue that is impossible for anyone to object to. Like the whole “think of the children”/child online protection issue, anyone who objects to activities that help a group of people with intellectual or physical disabilities really is entering Cruella De Vil territory. Of interest, though, was a suggestion by a Member State to use the term “disabilities and specific needs” in all future ITU documents on this issue (this term made its first appearance in the ITU context in the documents of the recent WTDC-14 held in Dubai).

3. Gender mainstreaming and promotion of gender equality and the empowerment of women through ICTs

After the protracted debate on the equal participation of women in Internet governance at last week’s CSTD WGEC (I’m still to blog on this… watch this space), it was a relief to hear overwhelming support by the Council members for the need to encourage equal participation of women in the ITU sphere. It was less encouraging that of the seven interventions from the floor supporting the ITU’s work in this area, six of the interventions were made by men.

The ITU Secretariat provided some historical data on women’s participation in ITU (and its previous incarnations). The first woman to take the floor was from the Soviet Union during a 1932 meeting (that’s 67 years after the creation of International Telegraph Union). And the first woman to be a head of delegation was from Bolivia, in 1962 (97 years after the creation of the Union). These statistics aren’t published on the ITU website yet, but the staff responsible for implementing Plenipotentiary Resolution 70 (Rev. Guadalajara, 2010) are compiling more information about the history of women’s participation in ITU and the result of that work will hopefully be published on the ITU website in some form soon.

A written statement by ITU Secretary General Touré, read out by Deputy Secretary-General Houlin Zhou, noted that the implementation of gender mainstreaming was a high priority for ITU in 2014. As part of its gender mainstreaming activities, ITU will be launching the GEM (Gender Equality and Mainstreaming) awards at a side event on gender issues during ITU Plenipotentiary Conference 2014 (PP-14). 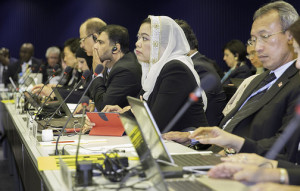 While ITU has expanded the number of publications available for free, in 2013, its revenues from the sale of publications increased when compared to the previous year’s sales. Interestingly, CDs and DVDs have experiences the largest growth in sales since 2009, with the overall sales of paper-based publications dropping dramatically between 2010 and 2012. Paper-based publications doubled in sales between 2012 and 2013 however (13% to 26% of sales). Sale of online publications (downloadable formats such as PDFs) has remained extremely small (only 1% of publication sales in 2013). These figures are important because ITU is considering how many other publications to make freely available and how much free availability of documents will affect ITU’s income stream. There were some concerns expressed in the room that additional free documents could have a negative impact on ITU’s budget (ITU is already trying to work out how to do an expanding list of things its members want it to do while also juggling budget constraints). Based on the discussions on Day 1, a draft proposal to make additional documents available freely will be amended by the author State and another interest State.

There were two documents submitted by the CWG: C38, which was an overall report on WSIS activities by the ITU, and an Addendum to C38 (which was a report on the CWG’s meeting held on Monday, 5 May 2014). There was a bit of discussion over the way that the Council would take action on the two documents: it was proposed that C38 be “noted” while C38 Addendum 1 be “approved”. Some Member States were reluctant to “approve” the Addendum, given it was a mix of summary paragraphs on the Monday meeting as well as proposals on the way forward. But when the Chair pushed for closure on the topic, asking if anyone had strong objections to the document, Member States kept silent, so the document was approved.

The long Council discussion on the definition of “ICT” cheered me up immensely. It put the ongoing debates about what “enhanced cooperation” is, and the never-finalized-but-still-a-working-definition-after-10-years “Internet governance” into perspective. The definition was part of a report by the Correspondence Group on the Elaboration of a Working Definition of the Term “ICT”. The working definition included in the report is:

After about half an hour of this to-ing and fro-ing, the Secretary General intervened: “This is a chess game. It’s starting again.” At the heart of the definition of ICTs, he said, was the fact that the Internet was lurking in the background. “ICT does include the Internet. Let’s face it. […] This is a very innocent definition […] But it’s not going to fly […] It’s harmless. Whether we define it or not, we’ll continue to work. We’ve been working for 150 years and will continue to work for another 150 years.”

The day ended with the Chair proposing that a small group get together and work on the definition outside of plenary in the hope of finding a consensus solution.

[1] Official ITU language only recognizes the terms “Chairman” and “Vice-Chairman”. However, I am not similarly constrained to use such gender-biased terms, and will only use “Chair” and “Vice-Chair”… even if the positions are still overwhelmingly filled by men.