On 7 October 2013, the Montevideo Statement on the Future of Internet Cooperation was published.

On 10 October, the Global Multistakeholder Meeting on Internet Governance (GMMIG) in Brazil was announced.

On 23 October, during a lunch break at IGF 2013, a very packed room listened to a rather confusing mixture of explanations from various I-Star leaders about the Montevideo Statement, the Brazil meeting, what was happening to what had formerly been known as ICANN’s 5th Strategy Panel on the Role of ICANN in the Future of Internet Governance, and the vague website called 1net that had mysteriously appeared in the days leading up to IGF 2013. 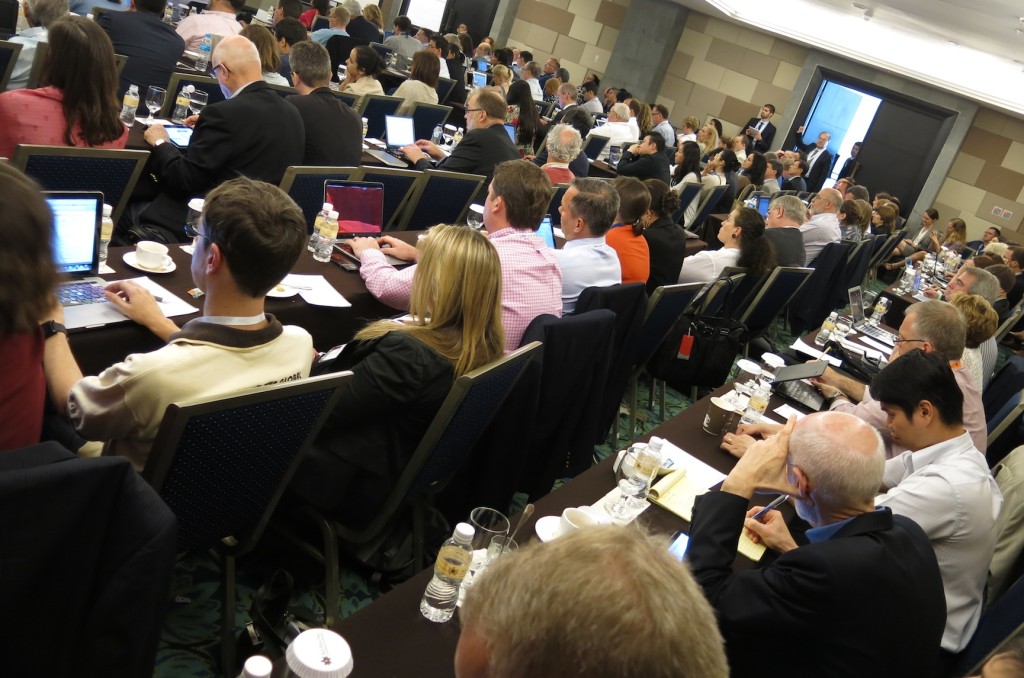 Standing room only at IGF 2013 lunch meeting as IGF participants crowd in to hear about the Brazil meeting, the 1net initiative and more.

Almost a month later, on 17 November, ICANN issued an announcement updating people on what had previously been ICANN’s 5th “Strategy Panel on the Role of ICANN in the Future of Internet Governance” and was now known as the non-ICANN-branded “Panel on the Future of Global Internet Cooperation”. The title of the press release called it a “High Level Panel” that would address “Internet Governance”, adding some confusion to what the panel’s real name was. Further adding to the confusion was the fact that the Civil Society Internet Governance Caucus began using “HLLM” to refer to this panel. HLLM (High Level Leaders’ Meeting) was the name of the IGF 2013 pre-event that had, at IGF 2012, been called the High Level Ministerial Meeting (HLMM).

On 20 November, at the ungodly hour of 7 am, ICANN 48 attendees met to hear the I-Star leaders clarify why they had written the Montevideo Statement, were supporting the Brazil meeting, and wanted the community to join 1net (which still had a very vague website and a mailing list—with the name of i-coordination—that failed to sign up a lot of the people who had signed up for it… which wasn’t helping public perception of 1net as aiming to be an open, bottom-up process). In response, the ICANN community decided to add yet another group into the mix: the Cross-Constituency Working Group (CCWG) on Internet Governance. The idea was to use the CCWG to break down the usual ICANN constituency silos and channel ICANN community input into 1net, which, in turn, would feed its input into the Brazil meeting (GMMIG).

Have you got all these groups and meetings mapped out in your head clearly now? No? What’s wrong with you? Keep up!

On 26 November, NIC.br announced that there would be four committees created to prepare for GMMIG (the Brazil meeting):

How did we end up in this state?

Seriously, Internet community people. Can we take a minute to just think about all of this? I understand the desire to find ways to improve Internet governance mechanisms in ways that help address all the criticisms that have been flung in the direction of the current Internet governance ecosystem. But is creating a plethora of new committees, panels and groups, giving many of them completely non-memorable names, thinking twice and renaming them to even less memorable names… is this really helping? If we are confusing ourselves with all of this, how on earth do you think it looks to outsiders? To those governments and other critics of the current Internet governance system?

A couple of issues, I think, are contributing to this confusion:

This was evident to me when the Montevideo Statement came out. That thing is not a statement. It’s a press release about a statement that actually hasn’t been written.[1] If you don’t involve people who understand communications, you end up with panel names like (High Level) Panel on Global Internet Cooperation and Governance Mechanisms. Sure, that panel name very accurately describes exactly what the panel is going to discuss. But who is going to type out a panel name that is 74 characters long? Who is going to say the name out loud when it is 24 syllables long? Instead, if the panel is lucky, the general community will shorten it to “High Level Panel”. The downside of this is that the panel’s name becomes decontextualized and emphasizes the top-down nature of the panel’s composition.

If the panel is unlucky, people will continue to refer to it by other names: “the panel that used to be the 5th ICANN panel”, “that other panel, you know, the one that’s not the Brazil meeting or the 1net thing”, or, using the hashtag the panel uses (#internetpanel), “the Internet panel”. The downside of this variety of names is that the panel fails to have any sort of uniform identity in the community. If “Internet panel” becomes the norm, it could make it sound like it’s the new ultimate source of Internet decision-making, attracting the wrong sort of attention to its activities. Lack of communications staff in the various processes is also apparent in the lack of any clear documentation about pretty much all of these initiatives. Sure, there’s a need to get the community’s input into these processes, but given the proliferation of activities, it would help the community know where to focus their attention if they had a clear picture of how all the pieces fit together.

2. Everyone sees a problem. Everyone has come up with a different idea for fixing it.

Yes, Internet governance is in need of a bit of re-boot. It’s great that so many people and organizations are recognizing this. What’s not so great is the fact that there’s not a lot of time before the 10th anniversary of WSIS in 2015 and there’s not enough coordination between all these people and organizations with great ideas. Add into the mix the poor utilization of the skills of communications staff, and you also have the problem of bridging the gap between the originators of initiatives and the communities they hope to involve.

How do we fix this?

I’ve used humour in this post to highlight the lighter side of the confusing array of processes that have begun in the last few months. But it’s also a very serious issue. As Internet governance undergoes its version of the Cambrian explosion, we need to ensure we emerge with a diversity of structures and processes that help, rather than hinder, Internet coordination and development long-term.

Unfortunately, the Law of Complexity suggests things get more complex—not simpler. When you break a plate, you could try gluing it back together again, but all you end up with is a bunch of shards glued together in a plate-like shape. It’s not the same plate it was before it broke.

Similarly, we are not going to be able to un-create the new and overly busy little world of late-2013 Internet governance initiatives. But it is possible to make it more accessible. We’re seeing on the 1net mailing list an absolute flurry of passionate people saying what they think should happen/should have happened/should not happen. It’s also happening on the Civil Society Internet Governance Caucus and Best Bits lists. But right now, it’s pretty much impossible for anyone to follow all of the mailing lists that are discussing Internet governance, let alone have the time to contribute well thought out opinions to the debates.

What’s needed now is for Internet technical organizations to use the skills of their plentiful communications staff to produce clear, easy to understand information that allows people to participate when issues of interest to them arise.

This is starting to happen, but it needs to happen more, and communications staff need to be front and centre whenever any of the initiatives release new information.

Having a random leader of an I-Star organization write a blog post or email to a mailing list in their personal capacity, expressing their own view on what’s happening, is not enough.

Yes, the Internet governance model is a bottom-up and multistakeholder, but when confusion abounds, as it currently does, there needs to be clear, high-level documentation available. Even if such documentation could only show decision trees, it would help the community understand where we are and what decisions need to be made.

Stage 1 of “Operation Re-boot Internet Governance” (ORBIG?) has been accomplished: the people have been awoken. We now need to accomplish Stage 2: give people the information they need to participate. Without that information, people become frustrated and destructive. We’ve seen that happening in the last couple of months.

We only have four months until the Brazil meeting and perhaps 18 months until the final review of the WSIS outcomes. Policy-related folk are clearly key players in Internet governance, but if we don’t take advantage of communications folk, a couple of thousand policy folk will remain stuck in the tangle of processes and committees and mailing lists, trying in vain to figure out where to best focus their attention.

[1] This is what I think the Montevideo Statement should have looked like if it wanted to look like the sort of statement that governments recognize as a serious output document:

Important: This is not the statement that the I-Star leaders wrote. This is what I wish they’d written if they’d taken the time to consult with one or more of their communications or policy staff first.

Montevideo Statement on the Future of Internet Cooperation

The leaders of 10 of the organizations responsible for coordination of the Internet technical infrastructure globally,

1. Having met in Montevideo, Uruguay, to consider current issues affecting the future of the Internet,

2. Recognizing that the Internet and World Wide Web have brought major benefits in social and economic development worldwide,

3. Further recognizing that both the Internet and World Wide Web have been built and governed in the public interest through unique mechanisms for global multistakeholder Internet cooperation and that these mechanisms have been intrinsic to their success,

4. Identifying the clear need to continually strengthen and evolve these mechanisms for global multistakeholder Internet cooperation, in truly substantial ways, to be able to address emerging issues faced by stakeholders in the Internet,

5. Reinforce the importance of globally coherent Internet operations, warn against Internet fragmentation at a national level, and express strong concern over the undermining of the trust and confidence of Internet users globally due to recent revelations of pervasive monitoring and surveillance;

6. Identify the need for ongoing effort to address Internet Governance challenges, and agreed to catalyze community-wide efforts towards the evolution of global multistakeholder Internet cooperation;

7. Call for accelerating the globalization of ICANN and IANA functions, towards an environment in which all stakeholders, including all governments, participate on an equal footing;

8. Call for the transition to IPv6 to remain a top priority globally and, in particular, Internet content providers must serve content with both IPv4 and IPv6 services, in order to be fully reachable on the global Internet.