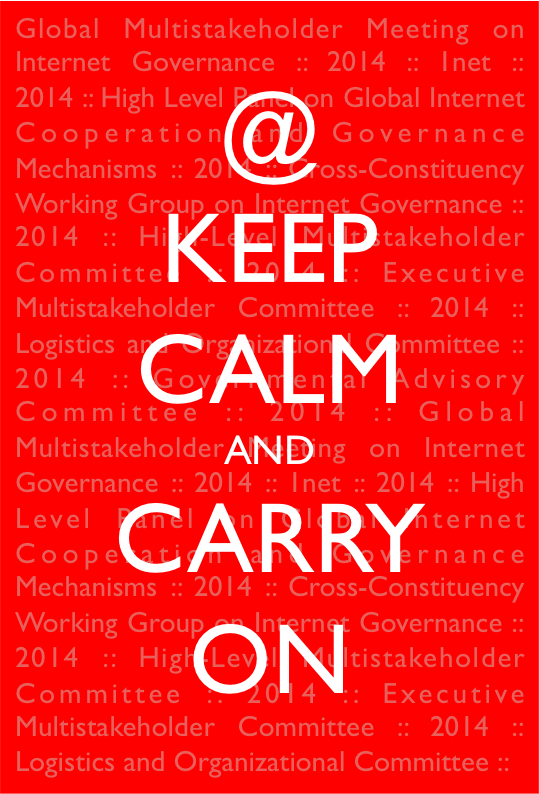 We spent the last quarter of 2013 developing all sorts if new activities to “fix” Internet governance, managing to thoroughly confuse ourselves in the process. A large percentage of these activities only have relatively short lives and will compete with each other for the attention (and participation) of the wider Internet governance community. In a series of posts over the next few days, I’ll look at those initiatives to see whether all the attention/panic/hand-wringing they’ve generated is warranted and see if there are better ways to approach each of the initiatives.

I’ll start with the big one, the Brazil meeting, which now has the formal name of…

What we know so far

There are only four months between now and the meeting in Brazil. It’s been just over two months since the meeting was first announced and a month since CGI.br announced that there would be four committees to organize the meeting. We’ve been told that the deadline for proposals to be discussed at the meeting is 1 March, three months from now. Since the 26 November announcement from CGI.br, however, there’s been silence.

No doubt, there is lots of work going on in the background, but there has yet to be a call for nominations for the two multistakeholder committees. Experience in other Internet governance activities has taught us that it will be at least a fortnight between a first call for nominations and a final deadline for nominations (with prerequisite grumbling from stakeholder groups that they don’t have enough time to do proper consultation to identify and select the best candidates). Given we’re heading into the Christmas/New Year silly season, the earliest we’re likely to hear a call for nominations is early January. That gives the committees one and a bit months to get their act together, decide an agenda for the meeting and decide how to handle Internet governance proposals submitted to the meeting.

GMMIG will be a two-day meeting, meaning there will be very little time for real discussion and negotiation between divergent views onsite.

The meeting does not yet have a website. And there have not yet been any official calls to submit proposals for the meeting.

What does this mean for GMMIG’s impact on Internet governance?

Let’s look at the meeting that many people have compared it to: the IGF. It takes a year for the IGF to organize each of its meetings. There are no binding decisions, recommendations or statements that come out of IGF, but MAG members and the community still manage to spend a lot of time discussing, disagreeing and developing a compromise IGF program that mostly reflects people’s various interests. (“Everyone is equally unhappy”, as Markus Kummer would say.)

Is the Brazil meeting, with its incredibly truncated preparation period, going to be able to achieve an agenda that not only reflects divergent views on what is important to discuss, but can also achieve the local host’s aim of “pursu[ing] consensus about universally accepted governance principles and to improve their institutional framework” in relation to Internet governance?

How are potential participants going to have the time to read and fully digest what could be a substantial number of proposals in March and early April, which is a period full of existing meetings and processes in the Internet governance sphere (ITU’s CWG-Internet, finalization of CSTD WGEC report, ICANN49, the additional ITU MPP meeting for the WSIS+10 High Level Event)?

If the meeting does result in a consensus on “universally accepted governance principles and [how] to improve their institutional framework”, how legitimate is that consensus, given the limits placed on the number of people who can attend? Do we end up with another optional opt-in set of principles, like the OECD Principles for Internet Policy-Making?

I suspect that with only two days, the best that the meeting can hope for is a very high level, generic set of principles. They may be useful to the extent that the pro-multistakeholder Internet crowd have a statement from a very big government-hosted event to back up their beliefs in bottom-up, participatory Internet governance. But if we look at the OECD principles, have we seen anyone amend their policy-making processes, or stamp their existing policy-making processes as “OECD compliant”?

The meeting is outside the UN framework, so will not have the same level of gravitas that, say, a statement from the 2015 WSIS+10 review can have. The Brazil meeting also does not have a clearly identified and committed community that will go away after the meeting and implement the governance principles, in the same way that IETFers will implement specifications documented in an RFC.

If GMMIG’s outputs are likely to be limited, should we invest our time in it?

Yes, but I’d suggest that we start to view it as a long-term process and not a hectic process lasting only a few months in early 2014.

What I believe is important about GMMIG is that it will probably begin a long-term series of government-hosted meetings that support the multistakeholder principle and look for ways to improve it. OECD and the European Commission have held some interesting meetings related to Internet governance issues, but the fact that most of the countries involved in those meetings have been from developed, not developing, countries, has limited how well the outcomes and recommendations from those meetings are perceived in the developing world.

What is also very important about GMMIG is the way a country outside the usual—to use a UN term—WEOG (Western European and Others Group) crowd is leading the process. It’s good to see a country like Brazil being proactive and leading the initiative to help reframe Internet governance. Contrast this to a number of countries in the UN space who prefer to complain about unfairness and the disparity of Internet development in different countries, but see the answer as getting funding from developed countries and interventions via UN bodies rather than being proactive about making changes themselves.

What is also important about GMMIG, and sets it apart from the “movement” that is 1net, is that it has governments as active members of the dialogue.

Finally, GMMIG is part of a long-term Internet governance dialogue. That dialogue started in earnest around the time of WSIS in the early 2000s and has ramped up again in the last couple of years as preparations for deciding the agenda for WSIS next 10 years began. The Internet governance community needs to stop focusing on specific events (WCIT, WSIS+10, ITU Plenipotentiary) as “threats” and instead focus on improving the overall system of Internet governance.

The problem with focusing on specific events is that the much of the community tends to collapse in an exhausted heap after each event, pat itself on the back, saying to itself “Phew, dodged a bullet there! Aren’t we lucky we saved the Internet from bad decisions at [latest evil event]?” But by seeing the threats to Internet governance as external time-delimited forces, we fail to see the threats we pose to ourselves. Sure, we need to take notice of events like ITU’s WCIT and this upcoming GMMIG in Brazil, but we also need to be mature enough to keep a constant eye on our own processes, our own organizations, and be open to criticism at all times—not just in the lead-up to specific global meetings.