People had just received their NETmundial confirmations (or not). Those who’d decided that NETmundial was probably going to be a waste of time were suddenly kicking themselves for not applying.

Those who decided not to include material about IANA in their NETmundial submissions were kicking themselves for not mentioning it.

Those who had included IANA-related material were kicking themselves that they hadn’t included more concrete details.

Every organization that considered itself an important part of the Internet governance ecosystem rushed to get out their own official statement reflecting on the news.

Nobody had a relaxing weekend.

But this is only the start. Despite the NTIA’s insistence that it won’t release IANA out into the world unless it’s sure it can be free of oversight by any single government or an intergovernmental mechanism, this isn’t going to stop some governments and likeminded stakeholders from arguing that an intergovernmental framework is what really needs to happen.

If you have long thought that the Internet governance world largely consists of the same people travelling around the world to discuss the same issues in what could really be the same set of gloomy conference rooms, you ain’t seen nothing yet. Below is my initial analysis of where I think we will probably see IANA-related discussions. I also suspect that the same debates will play out in many of the venues.

These aren’t in date order:

2. Informal consultations on the overall review of the WSIS, ending 30 March

Some States want there to be a repeat of the whole World Summit on the Information Society (WSIS) process from 2003-2005, including preparatory meetings. The fact some governments now may perceive it to be a realistic option that IANA can finally have overview by all 193 States, equally, may give them added impetus to support a full review and rewrite of key WSIS outcomes, including the Tunis Agenda. Such a rewrite, they may hope, could include more concrete text on the way forward for IANA.

There are 62 submissions containing proposals related to IANA and ICANN governance mechanisms. If the NTIA announcement had happened earlier, we would have had double that number. NETmundial submissions don’t come from many of the governments most critical of the current ICANN and IANA oversight mechanisms. It’s unlikely that such governments will want to submit submissions now, as they generally would have issues with the pro-multistakeholder focus of the meeting. Those who have already submitted contributions, however, may want to amend their documents to include more concrete material on IANA’s future. It’s not clear how NETmundial organizers plan to handle this. Whether or not updated proposals are accepted, however, in reality, when we’re all onsite in Sao Paolo, the late night drafting groups that are likely to be convened to develop the final outcome documents will probably be informal ways to inject new IANA-related material into the mix.

This meeting is before NETmundial, so it will be interesting what the wider selection of developing countries that aren’t engaging in NETmundial will have to say. Here, we could see a “think of the developing countries” slant on the path forward for IANA. I doubt it would be a significant component of the meeting, but there could be some language inserted into a resolution or two. Possible existing resolutions that might be appropriate venues for this are:

The most recent versions of these documents are available here. It is conceivable that there will be some parties wishing to add explicit mention of IANA in the WSIS+10 Vision document.

The IANA is one of the holy grails for governments wanting a greater and equal-between-governments role in the decision-making processes of Internet governance. WGEC’s final meeting was supposed to be in February, but it was unable to find consensus on the intractable issue of enhanced cooperation. The discussions at the extra April/May meeting added to try and finalize the WG’s work is likely to be further enlivened by some WG members’ desire to inject specific IANA-related recommendations. This could mean that the WG finds itself unable to reach consensus, again, and it needs to go back to CSTD and ask them to decide whether an extension of the WG’s mandate is needed.

The CSTD session could be in for a bumpy ride. This is because it is at the centre of a perfect storm:

The drafting group working on the draft WSIS resolution may, once again, end up finishing their work early on the Saturday morning, well after the CSTD Session has officially ended. ECOSOC is unlikely to care that much about IANA, but if the CSTD debate is inconclusive, it could spill into its space as well.

So many Internet-related proposals, so many opportunities to include text about IANA:

Many, many opportunities to discuss IANA. More reasons for people to want IGFs to produce more concrete outcomes. Expect many IANA-related workshops to be submitted in response to the recent call for workshop proposals.

What does this all mean?

I suspect that the large number of venues discussing what to do with IANA and the even larger number of stakeholders who will want a say in how IANA goes forward will mean it’s nowhere near realistic to think that a solution can be reached in time for the September 2015 of the current IANA contract with the US government. I think it is probably more realistic to see the current IANA contract being renewed, with the timeline for IANA’s future taking at least two years or more.

A long timeline isn’t a bad thing, however. While it is plainly clear that the IANA needs to transition out of US government oversight, it is better to take the transition process slowly, and get it right in the long-term, than to rush into it and end up with a different but still problematic management of IANA.

The important thing is to make sure all stakeholders are involved in ernest and that we don’t end up developing a solution by merely letting the usual globe-trotting participants out-talk less resourced stakeholders with equally legimate views on the way forward.

Given the announcement late on 14 March 2014 (US time) by NTIA that it intends to transition key Internet domain name functions to the global multistakeholder community, I’ve created a PDF that collates all IANA and ICANN-related material from the submissions to NETmundial in Sao Paolo next month.

The good news is that it is substantially shorter than the total of 302,000 words contained in the full set of 186 submissions. The bad news is that the excerpts from the 62 IANA and ICANN-related submissions still add up to a rather epic 33,500 words.

I’ve included all IANA and ICANN related submissions, even those that seem to be outliers on the spectrum of “well-thought out” to “somewhere west of planet Pluto”. I have not included excerpts from submissions that merely mention ICANN in passing. 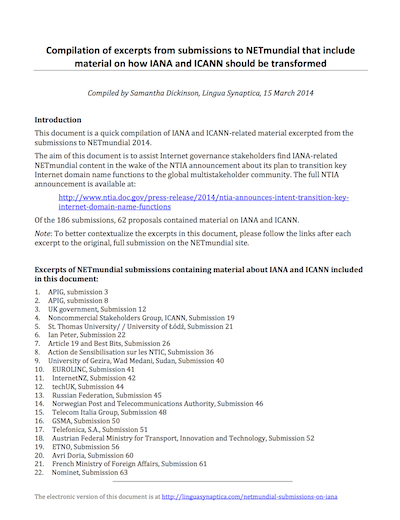 Compilation of excerpts from submissions to NETmundial that include material on how IANA and ICANN should be transformed [1.9 MB]

If you spot any obvious errors in the complilation, please let me know via this contact form.