IGF 2015 in João Pessoa got off to a red-hot start, literally and figuratively. The first shuttle buses of the day at 7:45 am were filled to capacity, with the informal Day Zero of IGF now no less important than the rest of the week. 21 sessions were held on Monday, 9 November, on topics as diverse as Italy’s Internet Bill of Rights, gender and the Internet, and the United Nation’s 10-year review of the World Summit on the Information Society (WSIS+10).  Many sessions were so crowded that it was standing room only. Despite this, the corridors of the IGF venue were filled with yet more participants catching up, meeting for the first time, and debating topics on a more personal level.

IGF has even fired up the residents of João Pessoa, with taxi drivers now adding a new topic of conversation to their repertoire. After a conversation about the importance of the Internet, one taxi driver paused thoughtfully before asking an IGF participant, “Is IGF important at a global level?”  Well, clearly the 1800 or so people who’ve descended on João Pessoa over the last couple of days think it is. 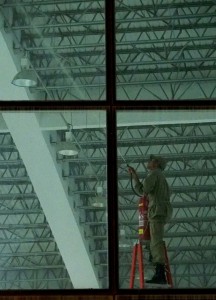 Local host staff put out a small fire caused by an overheated light.

Day Zero ended with a literal fire, when a light became overheated. The local host staff quickly and calmly evacuated the building. Sometimes, it really does take an actual fire to stop Internet governance enthusiasts from talking all night.

Everyone is back again tomorrow to continue the heated discussions on a variety of topics.