Update: the non-paper is now available on the United Nations General Assembly (UNGA) website for the preparatory process for the WSIS+10 review. The date for submissions of comments on the non-paper has also been extended from 14 September to 18 September.

At time of the original posting this blog, the non-paper had not officially been posted but a copy had been sent to the IGF 2015 MAG mailing list on preparations for the main session on WSIS+10.

When a paper is not a paper, but is actually a non-paper

Negotiations at the UN can obviously be highly political, so it can be advantageous to hold off publishing a formal input document (and the resultant skirmishing between States) as long as possible and instead publish an informal document to test the waters.

But, of course, the use of unofficial non-papers is so widespread, that it’s now a UN equivalent of the emperor’s new clothes: collectively, in public, everyone pretends that the non-paper is a harmless informal document but, in private, everyone actually puts just as much effort into responding to it as they would to an actual official draft.

The life of the WSIS+10 non-paper 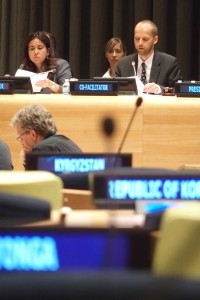 The non-paper was developed by the co-facilitators of the UNGA WSIS+10 review process based on 74 submissions by governments and other stakeholders sent in during July 2015. The submission by G77 and China was given an extension due to the fact that the G77 consists of a whopping 134 governments.

The co-facilitators of the process then had to whittle down the 387 pages of contributions into a single document that ended up only being just over 4 pages long.

Step 3: Non-paper submitted to the President of the UNGA (PGA)

Although the non-paper is nominally an informal document, it still has to follow the formal protocol of being submitted to the PGA for approval and distributions.

Step 4: Non-paper is published and the comment period begins

Step 5: Co-facilitators integrate comments on the non-paper to produce the “zero draft” of the final outcome document

Who would have thought that the world of UN diplomacy would have so much in common with software programmers? In both cases, they start a number sequence with zero, not one! Oddly, though, the UNGA WSIS world seems to have missed basic mathematics and skips one entirely, moving straight to draft two. The zero draft, which ups the ante for diplomatic negotiations in New York, is meant to appear at the end of September. However, given the non-paper missed the end of August deadline, it is quite possible that the zero draft due date may slip a little too. When the zero draft appears, the non-paper’s short life ends.

Following the publication of the zero draft, there will be another round of comments, followed by a second informal interactive stakeholder consultation in New York and a second preparatory meeting for UN Member States. For the full set of steps in the WSIS+10 process, see the Preparatory Process Roadmap.

Key statistics on submissions for the non-paper

A detailed look at who submitted

Because of the fluid nature of multistakeholderism, some governments and organizations chose to submit individual responses as well as be part of group responses. Below are the details of where contributions overlapped:

Seven G77 Member States chose to submit individual submissions as well as be part of the larger G77 submission:

One EU Member State chose to submit an individual submissions as well as be part of the larger EU submission:

Ten Member States submitted individual contributions and were not part of any collective contribution:

The Association for Proper Internet Governance submitted an individual contribution and is also part of the Just Net Coalition.

Telefonica and the Africa ICT Alliance submitted individual contributions and are also part of ICC BASIS.