Nobody challenged Deputy Secretary General Houlin Zhao (China) for the position of Secretary General. And yet, we still needed to have an election. China even held a glitzy lunch earlier in the week to convince people to vote for Zhao. Eager to be seen supporting the one and only candidate for Secretary General, Member State delegates thronged to the lunch – so much so that there was not space for all the people who wanted to be there. I asked a couple of government delegates why nobody had stood against Mr Zhao. The response: “Would you want to stand against China?” Good point. 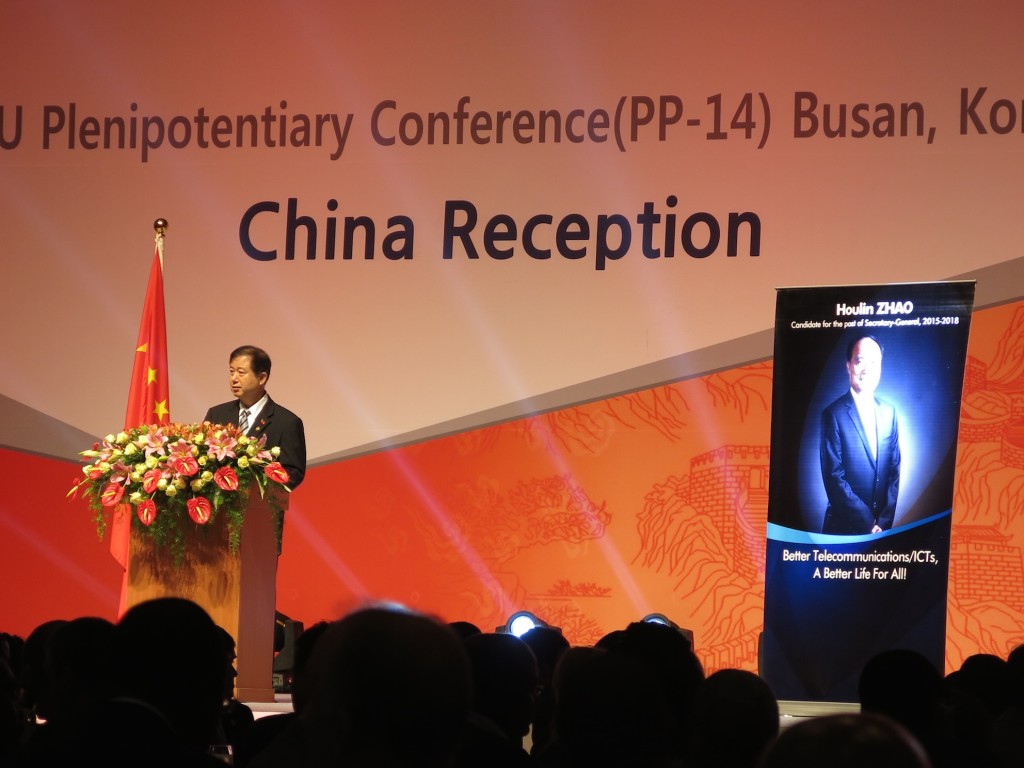 All of the 152 votes cast in the voting that began on the morning of Thursday 23 October at 8:30 am were in support of Zhao. Following the first round of voting, Member States were given the opportunity to congratulate Zhao on his election. And so very many Member States took that opportunity. Everyone wanted to be seen siding with the winner – even if that winner was a foregone conclusion. The poor Chair of PP14 kept trying to close the list of States wanting to congratulate Zhao on his election, but new States kept pressing their “request to speak” buttons. After about a dozen or so new States had been added after a couple of “the list is now closed” statements by the Chair, the Chair resorted to asking tech support to hide the display of those requesting to be added to the floor so he couldn’t see it any more. At the end of the session, Zhao was then swamped by media and more Member States wishing to thank him in person. 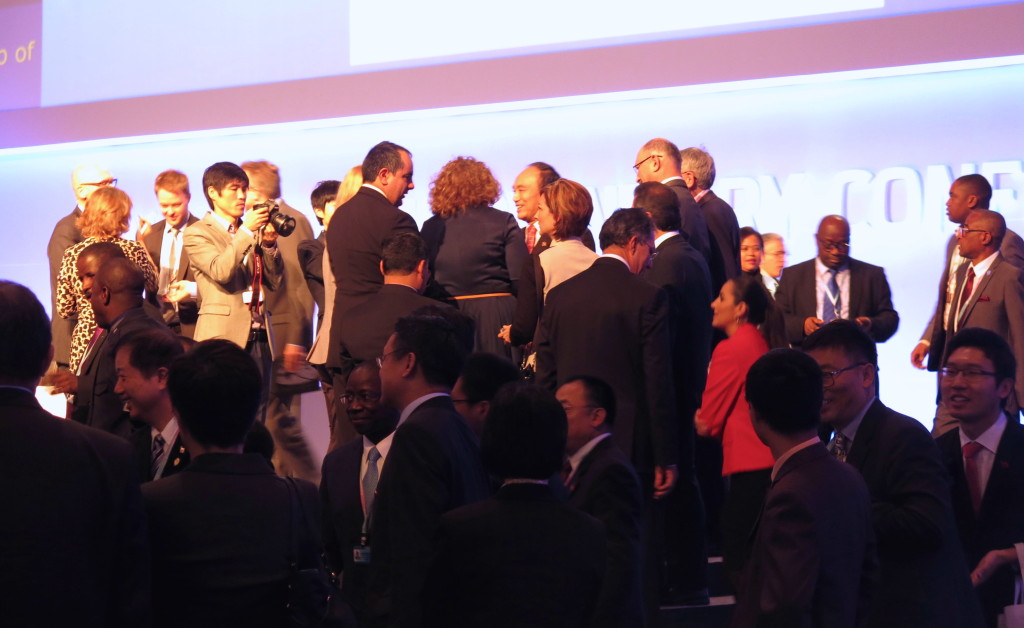 Following his election, Mr Zhao was mobbed by Member States and photographers

More congratulatory statements were heard in the afternoon where, once again, States kept asking for the floor after the Chair closed the list. Everyone wants to associated themselves with a winner.

This election, in contrast, has been a dragged out affair. The first round of voting took place at the same time as the Secretary General elections. There were five candidates, including two from Europe, which potentially split some of the pro-European votes. The outcome of the first vote was: 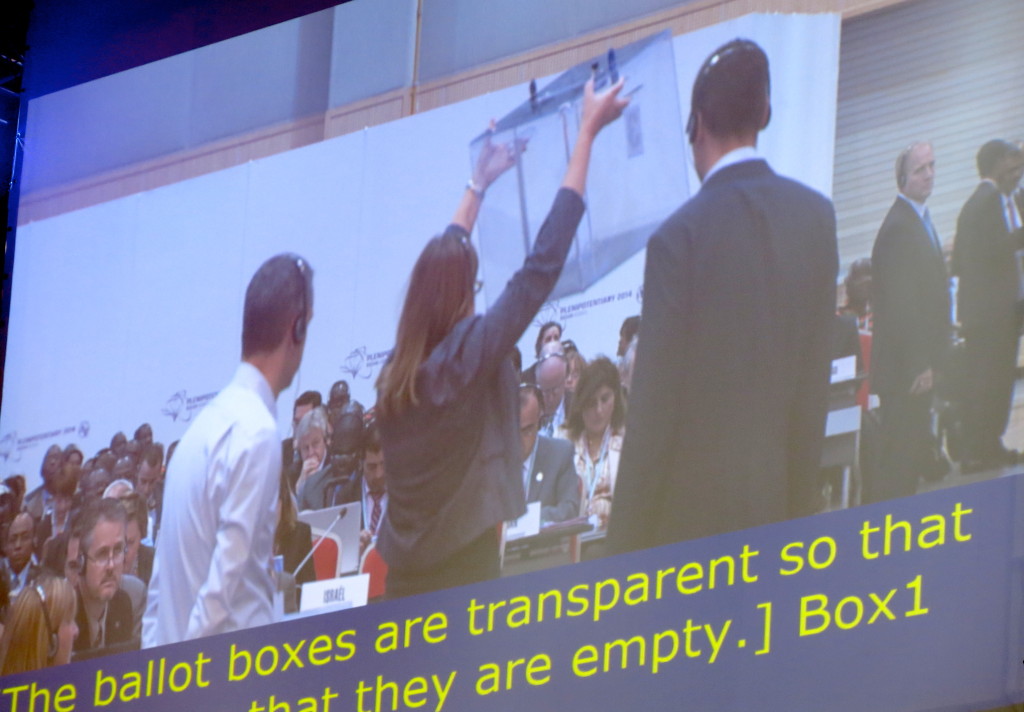 All five perspex ballot boxes are held up in turn to demonstrate they are empty before voting begins.

It’s tradition, apparently, for the candidate with the lowest number of votes to withdraw. Officially, there is supposed to be 12 hours between rounds of votes, unless the conference decides otherwise. Clearly, PP14 decided otherwise, with Round two of voting happened later that day. The results of round two, held on the afternoon of October 23 were:

A couple of delegates I spoke to believed that having two candidates from Europe was adding to the inability to reach the required majority. Round three was held on the morning of Friday, 24 October. By this time, the novelty of the election was definitely beginning to wear off. The results were:

Still no clear winner. Once again, the 12-hour period between rounds was waived, with the fourth round elections taking place early Friday afternoon. At this point, given Member States had quite a great deal of experience with the voting process under their belts, the Chair of PP14, Mr Won-ki Min, as well as Doreen Bogdan-Martin, the PP14 Executive Secretary, chose to truncate their explanatory preambles to the vote. They also sounded, quite possibly, just a little bit jaded. 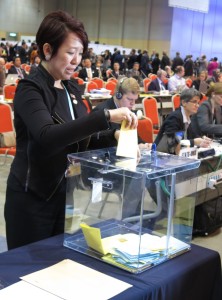 If PP14 had needed to go to a fifth round, and the required majority had still not been achieved, the older of two candidates would have been given the role. In other words, ITU elections are the one place where being closer to the grave can actually be an advantage.

Elections for Directors of the Bureaux

There were three director roles up for election. Two of the three roles were uncontested and won by the incumbents:

The third directorship, for the Telecommunication Standardization Bureau (TSB), had three nominees. The results of the election were:

A quick analysis of the ITU’s new top five leaders

The new leaders of ITU will assume their roles at the end of 31 December 2014.

Of the five new leaders, geographically:

Although there are five leadership positions and five ITU regions, neither Region A (The Americas) nor Region C (Eastern Europe and Northern Asia) are represented in the ITU leadership that will take the reins on 1 January 2015. I have also been told (but have not independently confirmed) that nobody from the Americas—that’s north, south and central America—has been in one of the top ITU leadership positions for the last 16 years. I had understood that the tradition in the UN system was to rotate the leadership positions amongst the various geographic regions, but this does not seem to be the case in ITU. It is not clear to me why this is so.

Of the five new leaders, the ratio of new versus old blood:

ITU has more information about the successful election candidates, including their acceptance speeches at
PP-14 elections: results.