Today is Christmas Day, when lots of people get together to share gifts that seemed like a good idea when rushing around the stores at the last minute on Christmas Eve and to consume the same amount of calories in a day that they’d normally eke out over a week.

In that spirit, I present you with a festive rewrite of that never-ending Christmas song, The Twelve Days of Christmas. Because the full song is a marathon twelve verses long, I’m only presenting you with the final verse, where all twelve “gifts” are included:

On the twelfth day of Christmas
dot #netgov sent to me:
gTLDs increasing
Post-WCIT hands a wringing
#Hashtags a trending
Many meetings pending
Talks never-ending
v6 routes still missing
NSA a list’ning
No privacy
One Net for all
IGF
Go bottom-up
and a WSIS+10 review!

Why am I writing this? I’ve been told that I haven’t written anything amusing lately. There are much better summaries of ICANN 47 out on the Web, so what I’m presenting here, a week after ICANN 47 has ended, is… 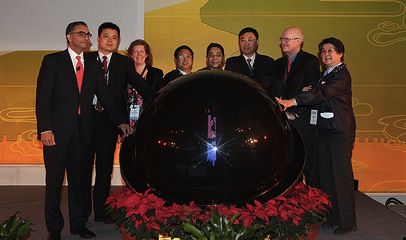 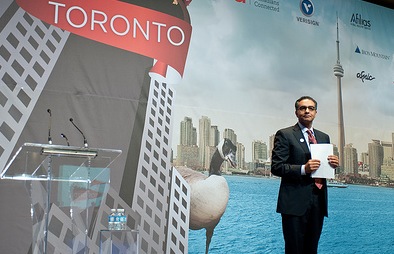 But I had to settle for this less visually interesting, but more historically significant, event.

New gTLD applicants were cranky with the GAC’s advice and the Board’s new gTLD committee said the GAC’s advice was not implementable.
The GAC’s Category 1 safeguards from Beijing didn’t go down well with applicants. The Board’s New gTLD Program Committee (NGPC) questioned how well thought out the advice was, suggesting that there was no way it could actually be implemented.

The NGPC said they weren’t rejecting the GAC’s advice outright, but hoped they could work with the GAC to find a way to achieve the GAC’s aims. The GAC explained that the advice was meant to be an early draft for comment by the wider ICANN community and not a final position. The NGPC seemed mollified by this. New gTLD applicants weren’t so happy, and spent a lot of time at the microphone during the Open Forum expressing their displeasure.

Amazon was particularly cranky with the GAC.
It was surprisingly dramatic when, one by one, many of the GAC members expressed their support for Brazil’s objection to Amazon Inc.’s .amazon application in their Tuesday morning GAC session. Amazon Inc. wasn’t in the room on Tuesday, but they were certainly at the microphone during the Public Forum on Thursday to express their strong objection to the GAC’s Durban advice on .amazon. Stay tuned for more on the .amazon issue in coming months.

The GAC stayed up well past midnight developing a Communiqué text that all GAC members could live with, if not actually be happy about.
Unsurprisingly, the cause of the long drafting session was debate about new gTLD strings. .wine and .vin were the main culprits. No doubt, many of the GAC members were desperate for a glass or two of .wine to drown their sorrows when the marathon drafting session finally ended.

Those who have followed ITU for any length of time may be interested to learn that it was Kavouss Arasteh, the Iranian representative to the GAC, who played mediator between opposing parties in the late night negotiations. Arasteh is the man who initiated the infamous vote during WCIT. After that vote, you may remember, things went seriously downhill. 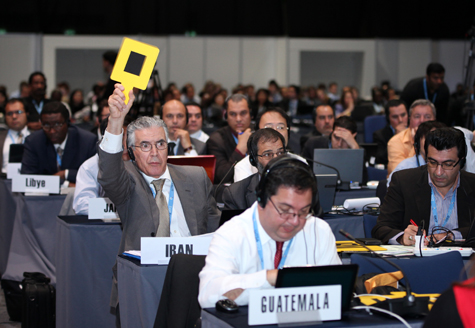 Arasteh is very excited to vote at WCIT. Other participants? Not so much. Photo credit: ITU

Arasteh seems to be redeeming himself by acting as elder statesman at ICANN GAC meetings. Durban was only his second ever ICANN meeting too. Keep an eye on Arasteh, folks. It’ll be interesting to see how he progresses as he learns even more about ICANN-related activities.

The GNSO went around telling anyone who’d listen that the GNSO Policy Development Process (PDP) wasn’t as broken as everyone had been saying it was.
The general message was that, yes, the PDP can take two to three years before something comes out the other end, but that other processes, including those by IETF and ccNSO, can take even longer. Even Chehadé called for less criticism of the GNSO PDP and more celebration of its achievements.

ALAC and the GAC agreed that working together would be useful.
Unfortunately, they couldn’t think of any current projects that they could work together on, and momentarily discussed if they could create some new joint projects. Because people in the ICANN community don’t already have enough on their plates. We definitely all need more projects to fill in that time we currently squander on sleep.

The ccNSO celebrated turning 10 years old by showing a video mash-up of ccTLD community members dancing in ways that only geeks can.
Perhaps “half-hearted wiggling” would be more accurate than “dancing”, but anyhow… That little gem has now been uploaded to YouTube for all to enjoy. Skip through to 3:20 to go straight to the dancing.

The ccNSO celebration dinner also marked itself out as possibly the only time in ICANN’s history that an entire Supporting Organization tried to escape the ICANN CEO. As Chehadé arrived to schmooze the room, the last remnants of the ccNSO party goers were escaping via the lifts. Chehadé, not to be defeated, invited himself onto the homeward bound bus, helping out the bus driver by calling out the names of conference hotels on the route.

There’s enough happening in the crowded Internet governance calendar to fill the Internet Governance Update session. We don’t need to revisit the same event at each meeting.

ICANN fellows were really active.
Whatever ICANN is doing to support ICANN fellows and newcomers, keep doing it. It was fantastic to see so many new faces speaking so confidently at the microphone in a wide assortment of ICANN sessions. I didn’t feel completely comfortable at ICANN meetings for a long time, so it’s great to see ICANN is working so hard to make today’s newcomers feel valued from the moment they step foot into the conference venue.