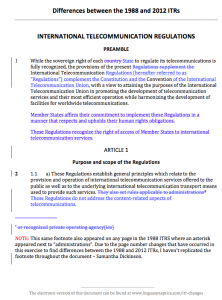 For those reading through the recently released DT/55, which contains all the text of the ITRs, its appendices and associated WCIT-12 resolutions, I’ve highlighted the changes made to the Internet-related resolution text in the screenshot below. As you will see, the changes made to the text since the draft was discussed as part of DT/51 rev. 1 in the final plenary of 12 December are very minor: 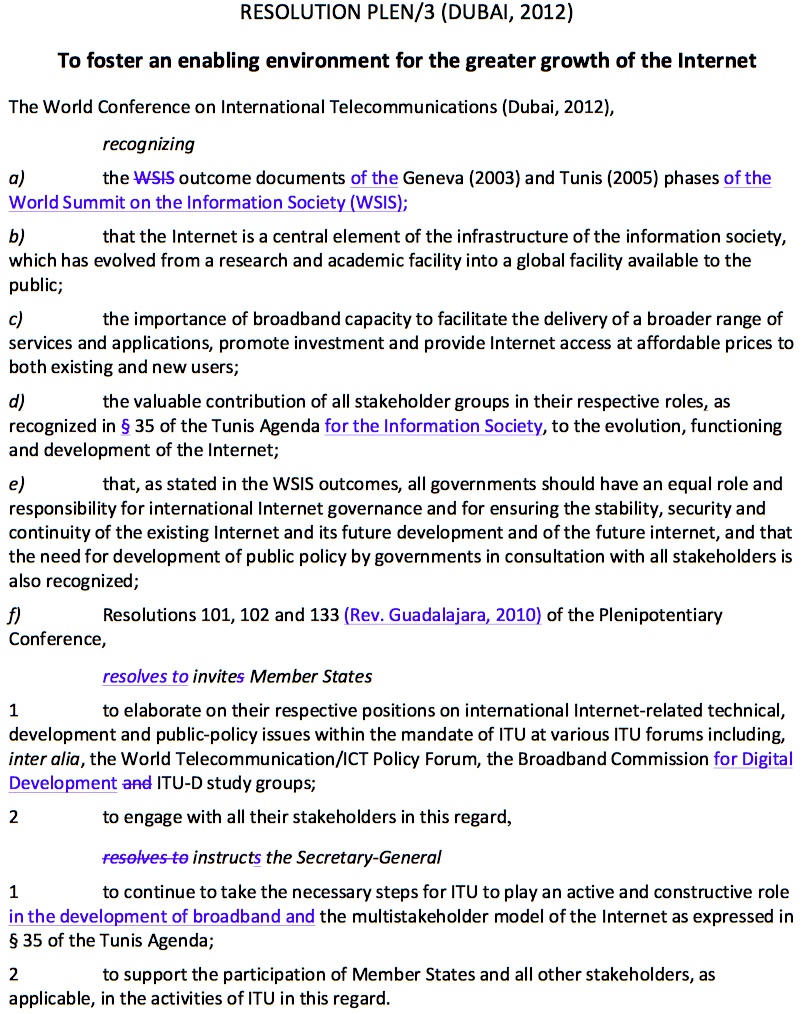 There seems to be a bit of confusion about how the Internet-related resolution, “To foster an enabling environment for the greater growth of the Internet”, in DT/51 rev. 1 (page 22), at WCIT-12 was just adopted in the plenary. Unfortunately, the official ITU .docx transcript of the latest WCIT-12 plenary that ended at 1:30 am will probably take a few hours to be published.

Just over a thousand delegates from Member States are entering the final negotiation phase of WCIT-12, and with the reappearance of the controversial proposal document by Algeria, Saudi Arabia, Bahrain, China, United Arab Emirates, Russian Federation, Iraq, Sudan, things could get quite ugly.

So let’s breathe, step back a minute, and look at something good that has come out of WCIT: ITU’s positive response to calls from civil society and others to open up its deliberations. Let’s see how well this new era of multi-stakeholder ITU is progressing. 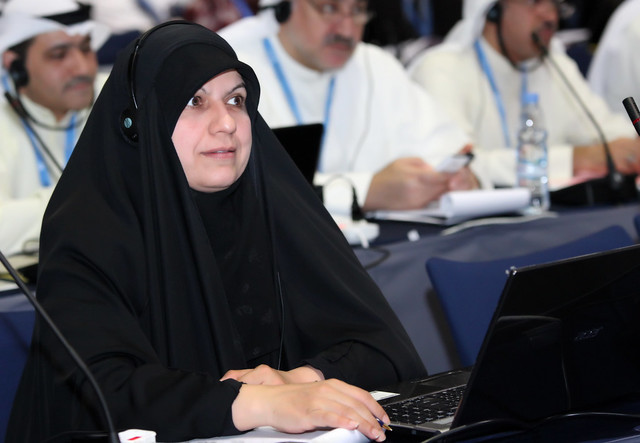 WCIT preparations were undertaken by a special Council Working Group to Prepare for the 2012 WCIT (CWG-WCIT12), which held meetings beginning in early 2010 and ending in June this year. Like all ITU CWGs, its documents are restricted to Member States only. Not even Sector Members can view CWG documents.

At the 2011 and 2012 ITU Council meetings, Member States supporting the open Internet model had tried to encourage the Council to open access to the documents of another CWG of interest, the Council Working Group on international Internet-related public policy issues (CWG-Internet), and its Dedicated Group predecessor. Those attempts failed. Which is a little odd, you might think, given the last Council meeting had agreed to solicit public comments on issues the CWG-Internet deemed could benefit from expert input from non-government sectors.

It seems that CWG documents are, as a rule, Not for Public Consumption.

While CWG-WCIT12 was meeting behind closed doors, non-government stakeholders—in particular civil society—having heard that some of the WCIT proposals mentioned Internet-related issues, began a campaign to have the WCIT proposals made public. On 17 May 2012, over 40 civil society organizations and individuals sent ITU Secretary-General Touré a letter requesting that the CWG-WCIT12 documents be made open, as well as requesting that WCIT and its preparatory process be opened to “meaning participation from civil society”. During the 15th Session of the Commission on Science and Technology for Development (CSTD) the following week, a civil society representative, Marília Maciel, repeated the request while speaking as a panelist. In response, Touré lost his temper a little, and, reinterpreting Maciel’s words, retorted that since civil society kept asking for Internet governance to be discussed as part of the ITRs at WCIT-12, he’d pass the request on to ITU members. Such a response didn’t endear him to the non-government representatives in the room. However, since then, things have improved markedly:

These were all very positive steps from ITU to make its WCIT activities more transparent to non-government stakeholders. This is an organization that is not, by its nature, very open. As an intergovernmental organization, it is used to closed-door negotiations. The fact that it has begun to changed course and let non-government folk see some of its inner workings is very impressive and should be applauded.

The change is also a testament to the power of campaigns conducted by non-government stakeholders to raise awareness of the importance of ITR negotiations and the possible ramifications for Internet and telecommunications users.

If this were a report card, I’d also have to mark some players down for inciting hysterical news articles, opinions and blogs on the evilness of the ITU. Some stakeholders were using trial by media to gain public support for their positions. This was not a great way to encourage open and productive interactions between newly engaged non-government stakeholders and existing government participants in the WCIT world.

Spearheaded by Touré, the ITU Secretariat responded to the various negative press reports with a PR campaign denying that ITU wanted to “control the Internet” and pointing out how open and multi-stakeholder WCIT would be. 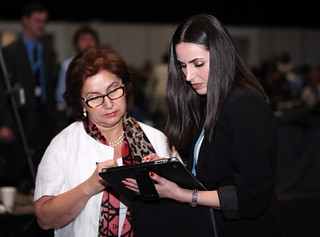 Another two of the 25% of WCIT-12 attendees who are female. Credit: ITU

According to statements Touré has made, the ITU and its current WCIT-12 discussions are multi-stakeholder because it’s possible for non-government stakeholders to participate by attending under the umbrella of their government’s delegation.

An additional issue is saying that WCIT is multi-stakeholder because Member States can add non-government representatives to their delegations ignores the obvious problem that many countries do not have any interest in including the divergent views of non-government stakeholders.

As seen at the recent 2012 IGF in Baku, the Azerbaijan government worked hard to keep the oppositional views of the country’s civil society out of sight. Many IGF participants watched in stunned silence during the closing plenary as a “civil society” representative from Azerbaijan spoke nothing but positive words about life in the country, despite the fact that most people in the room were aware of Azerbaijan’s less-than-stellar human rights record. We can see, therefore, that some countries are never going to have multi-stakeholder delegations at events like WCIT-12.

So what is the solution? The ITU Secretariat is obviously working hard to improve public opinions about ITU and its work. However, the Secretariat’s hands are tied in many ways. While it can tinker at the edges and provide civil society briefings and public webcasts of main sessions, for substantive changes, it relies on decisions by Member States. As we have seen from WCIT-12 webcasts, not all ITU Member States are open to being open. All is not lost, however.

The future for multi-stakeholderism at ITU looks good, if not positively glowing

This past week or so of WCIT-12 has not only been webcast and transcribed. It has also been tweeted and blogged and talked about by people and organizations who in the past would never have considered an ITU event worth following. As we’ve learned from the Arab Spring, once the door is opened a crack, it’s very hard to close the door again. People are watching WCIT-12 and they are watching how their governments are behaving at WCIT-12. As a result, we may find that future ITU meetings, particularly those that concern Internet-related matters, are conducted more openly.

I doubt, though, that such meetings will lose the drama of States strongly divided on issues related to the Internet. If they did, I don’t they’d be half as much fun to follow!