I’ve been working on some substantial posts about WCIT-12, but have been sidetracked by statistics. They’re shorter, display nicely in graphs, and don’t require as many words to be written about them. So until I finish my other articles, enjoy these numbers:

Notes on the above:

What can we learn from the large numbers of documents in each category above? When combined with the punishing schedule of Ad Hoc Group, Working Group, Delegation, Committee and Plenary sessions, it’s easy to see why delegates are getting confused about what document is under discussion at any given point in time.

Using the ITU document ADM4, which in its current incarnation lists all WCIT-12 delegates who had arrived onsite as of 6 December, we have:

Let’s look at that in pie chart form, shall we? 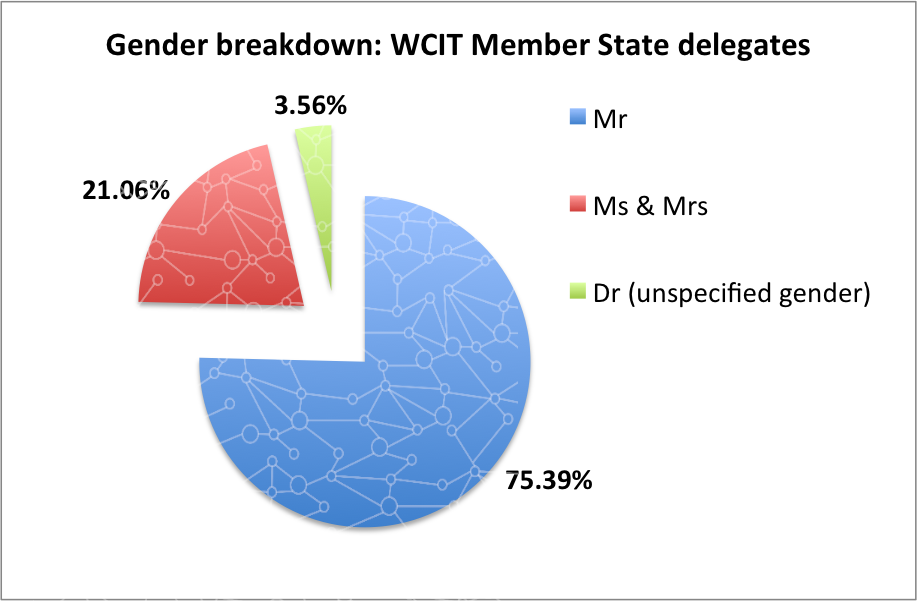 Given three-quarters of the government delegations are male, I now understand why “Chairman” and “Vice-chairman” are the standard currency at the meeting. I do wonder why 49 of the women felt it necessary to inform the world that they are married given there is no way to differentiate between the married and unmarried men at WCIT-12. I prefer how the Internet Governance Forum registration list works: you’re either a “Mr” or a “Ms”.

Despite the opening ceremony declaration of peace and harmony, the first plenary session of the World Conference on International Telecommunications gave us a hint of what is to come over the next two weeks:

In an environment where nations all vie to have their ideas adopted as the international norm, getting your proposals discussed before anyone else’s can influence the discussion to your benefit. Equally, the earlier you can knock out your opposition’s ideas, the more chance you have of getting your proposal through. Alternatively, if you are patient, you could sit back, wait for all the other competitors to knock each other out of the running, and come in at the end with your proposal intact. Formal protocol and procedures help prevent a meeting descending into a Lord of the Flies scenario by introducing apparently neutral ways to proceed with discussion. How are we seeing this play out at WCIT-12? 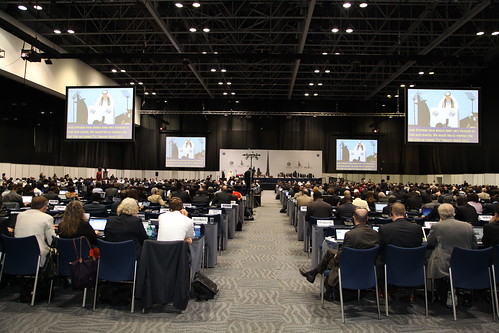 There were repeated references to the fact that most of the world’s population still doesn’t have a connection to the Internet. To illustrate the exorbitant costs of connecting to the Internet, the jet-setting ITU Secretary-General, Hamadoun Touré, complained that he had to pay 76 USD for three days’ hotel Internet connection while in New York recently. The Twitter crowd wasn’t sympathetic, by the way, with @stickywcit suggesting Touré pick a hotel with free wifi in future.

The opening ceremony may have been full of positive words about ICANN, but the subtle inference in the first plenary was that the Internet community was somehow failing in getting the Internet out to the world’s majority who are located in developing countries. ITU has long positioned itself as the champion of developing country telecommunication needs, so you don’t need to be a mind-reader to see where this may go over the next fortnight.

Touré has made it clear that WCIT-12 is not about taking over the Internet, nor about Internet governance. However, what the WCIT-12 is about—connecting the unconnected via broadband, mobile, standards for modems, etc—does stray a little into Internet administrative territory. Newly connected Internet users need IP addresses, for example. And modems need software that can handle IPv6. Last week, Member States at WTSA-12 agreed to continue study into IPv6 in Study Group 2 or 3. At WCIT-12, it may be difficult for ITU Member States to agree on what is relevant territory for ITU to handle under the banner of “connecting the unconnected” without, perhaps, straying into areas already handled by parts of the Internet governance ecosystem, but that are seen as failing the disconnected two-thirds of the world.

The first informal discussion group was formed, and met at 8 am on Day 2 of WCIT-12 to discuss whether references to “Recognized Operating Agency” in the ITRs should be changed to the far broader term, “Operating Agency”. Soon, the 8 am informal discussion group slots will be filled and earlier slots will be needed, as well as slots after the official WCIT-12 days end at 5:30 pm. Weekend sessions will be invoked, too. Participants will become exhausted and grumpy. You may not think you should care how little sleep high-level government representatives are getting, but tired officials are less likely to pick up problems in newly proposed text for the ITRs. Tired and cranky officials are also less inclined to feel generous towards their ideological opponents during the more intense debates at the meeting.

Finally, a couple of unconnected thoughts

Touré made a number of comments on the first day of WCIT-12 about his recent travels around the world. I wondered whether these were perhaps a little ill-judged. A lot of developing Member States can’t attend ITU meetings without special funding from ITU. Even then, some of the smallest and least developing states don’t have the human resources to devote to regular ITU participation. Knowing that the ITU Secretary-General is travelling the world and able to pay 76 USD for three days’ Internet access in New York might, to such states, seem as offensive as the large bonuses bank executives received in the wake of government bailouts of banks in the US and UK. On the other hand, developing countries may appreciate knowing that the Secretary-General is travelling to them, rather than expecting them to travel to ITU’s home in Geneva.

I am amazed at the lack of gender neutral language being used in the plenary. “Chairman” and “Vice-chairman” were the norm, even when referring to female occupants of those positions. ITU has been very active in promoting the role of women in ICTs (for example, Girls in ICT Day), so the use of phallocentric terminology at WCIT-12 was a bit confusing. Just because most of the positions are filled by men doesn’t mean that gender-neutral terms are unnecessary. Language helps define norms, and if ITU continues to use “Chairman” and “Vice-chairmen”, even for women in chairing positions, it fails to challenge the outdated norm that men are the natural choice for leadership roles in ICT.

After months of acrimonious mud-slinging between the more extreme ends of the pro-ITU and pro-Internet camps, the opening ceremony of WCIT-12 in Dubai was full of peace, harmony and goodwill. ICANN’s new CEO, Fadi Chehadé, spoke warmly of the new era of cooperation between ICANN and the ITU. ITU Secretary-General, Dr Hamadoun Touré spoke at length of the virtues of consensus, of the great opportunity WCIT-12 presented for the ICANN and ITU communities to reach out to one another.

This was a far cry from the 2010 Plenipotentiary in Guadalajara, Mexico, where ICANN had wanted to attend, but had been told that as ICANN was not a sector member of ITU, it was not possible for ICANN to attend. The story also floats around that ITU didn’t invite ICANN to attend one of its meetings because ITU had never been invited to an ICANN meeting. The Internet community’s response to this may be, “Well that’s silly, because nobody’s invited to an ICANN meeting. It’s open to anyone who wants to attend”. However, if you come from the far more formal world of intergovernmental forums, the invitation process forms an integral part of conference protocol.

Two years on, in 2012, the invitation problem has been overcome. In a first, ITU invited ICANN to speak at the opening ceremony of WCIT-12. At the opening ceremony, Chehadé, who had evolved his “summer of listening” pitch since ICANN 45 in Toronto, told the room of 160 ITU Member States that “Engagement starts with listening”. Even better from the point of view of the Internet crowd, this engagement had begun at the Internet Governance Forum (IGF) in Baku last month, where Chehadé and Touré had their first face-to-face discussion. Given the shaky legs that the IGF is standing on—it still has no Executive Director or Special Advisor to the UN Secretary-General, and its mandate comes up for renewal in 2015, pending WSIS+10 outcomes—having the leaders of the two most prominent organizations in the Internet governance debate come together at the IGF is a huge boost to argue for IGF’s effectiveness.

Will peace and harmony reign throughout WCIT-12?

Of course it won’t. Having the leaders of the ITU and ICANN secretariats swap a handshake or two during the opening ceremony won’t solve significant idealogical differences between governments on the telecommunications and Internet-related matters that up for discussion over the next couple of weeks. But even though there will be some seriously fraught debates and disagreements during WCIT-12, there must be a final ITR document by the end of the meeting. Some things to remember:

Yes, a lot of the early WSIS disagreements were about ICANN’s role, but Internet governance involves far more bodies than just ICANN. It is a very positive step forward to see ITU and ICANN speaking in such positive terms about each other at the WCIT-12 opening ceremony, but it would be a mistake to think that a good relationship between Touré and Chehadé solves the all of the relationships and coordination processes within the Internet governance ecosystem once and for all. The improved ITU/ICANN relationship is a very big step, but let us not forget all the other very important players in the Internet ecosystem. The Internet is a network, not a hierarchical pyramid. ITU and ICANN are both important, but neither organization, by themselves or as a pair, comes anywhere near fulfilling the vast and diverse range of processes needed to maintain and develop the Internet.

Badly written ITRs could damage the Internet. But badly written ITRs could also damage telecommunications. Focusing world attention on WCIT-12 as the pivotal point in the Internet’s future is overly simplistic. WCIT-12 is going to be an important two weeks for the Internet’s future, but there have been other important weeks for the Internet this year, including IGF, ICANN, IETF and other meetings. Let’s have less hysteria over WCIT-12 and more long-term, level-headed deliberation on Internet development.