Next week, the WSIS+10 High Level Event (HLE), coordinated by the ITU, will be held in Geneva as an extended version of the annual WSIS Forum. The WSIS+10 HLE began its life as an ITU-specific initiative, but mirroring the creation of the initial WSIS process,[1] the WSIS+10 HLE had subsequently become part of the larger UN-wide process to conduct a 10-year review of WSIS.

Originally, the HLE was supposed to take place in Sharm el-Sheikh, 13-17 April 2014. But due to ongoing uncertainty about the political situation in Egypt, it was decided to move the HLE to Geneva, where WSIS Forums are usually held. Along with the change of venue, there would also need to be a change of dates. At first, it was thought that the meeting might be pushed to the end of 2014, but eventually, it was announced that the HLE would be held 10-13 June, with pre-events (a bit like the IGF “Day 0”) on 9 June.

Two outcome documents will be endorsed at the HLE:

A bit of background on preparations for the High Level Event

The work to develop the two documents to be endorsed at the HLE began back in July 2013, when all stakeholders were invited to submit contributions to the draft versions of these documents. Originally, there were only three meetings planned for the Multistakeholder Preparatory Platform (MPP) that would develop consensus versions of the two outcome documents:

However, as these meetings progressed, it became clear that there was no way that the contents of the outcome documents would reach consensus within the combined total of seven days of the three meetings. Given the change of dates for the HLE itself, it became possible to add some more MPP meetings. So an additional two, longer, meetings were added:

The second additional MPP was supposed to be held in Sharm el-Sheikh. This was no doubt a kind of diplomatic consolation prize to Egypt: while it wasn’t possible to risk the security of a bunch of government ministers at a Sharm-based HLE, sending the lower level folks who attend MPP meetings was more a more acceptable risk.

The April MPP meeting was just before the high-profile NETmundial meeting so didn’t perhaps get the attention it really deserved from non-government stakeholders in the world of Internet governance. At the beginning of the April MPP, there was optimism that the May meeting wouldn’t be needed. However, it was clear as the meeting went on that the May meeting would most definitely be needed. But not in Sharm el-Sheikh as earlier announced. No. It would be held in—no surprises here—Geneva. (Because reasonably-priced hotel rooms in Geneva in May are so very easy to find… Not.)

Changing forms of interaction at the MPPs

The dynamic of the MPPs seemed to change over time to subtly favour the use of more intergovernmental negotiation tactics. The MPPs have certainly been very different in tone—increasingly so over time—from other multistakeholder processes such as the earlier ITU WTPF Informal Expert Group (IEG) meetings and the UNESCO-hosted WSIS+10 Review Event in 2013. I suspect this is may have happened for a couple of reasons:

There had also been an attempt to remove some of the heat from the MPP negotiations by removing any discussion of Internet governance issues, including any reference to “enhanced cooperation”, even if it wasn’t in relation to Internet governance. But it didn’t substantially speed up the overall process of negotiation.

Some very well used intergovernmental negotiating techniques have been invoked in recent MPPs:

The participants of the fifth MPP meeting worked through a public holiday in Geneva (Ascension Day on 29 May) as well as a full Saturday session that finally ended during the first hour of the morning of Sunday 1 June. And yet the participants still didn’t reach consensus on all elements of the draft WSIS+10 Vision document.

Major sticking points during the meeting weren’t about ICTs themselves, but about fundamental ideological differences on the following issues:

Freedom of expression disagreements, in particular, played out in discussions on WSIS Action Line C9, Media. Proposed text about protecting the safety of journalists—taking into account the International Convention on Civil and Political Rights—was met with a counter-proposal to add text stating that it must be ensured that journalists behaved responsibly as well. The counter-argument to this counter-argument was that while the ethical responsibilities of journalists was something that could be considered, it had absolutely no place in a paragraph about the safety of journalists as it suggested that it was okay for journalists deemed to be “irresponsible” to be killed. Also, not related to the freedom of expression issue, but “bloggers” and “social media producers” turned out to be a highly contentious terms in the C9 Action Line. An attempt at compromise (a large number of delegations had supported the compromises text) wasn’t even allowed to be read at the meeting, as some government representatives strongly objected to new text being suggested very late on a Saturday night, well after the meeting should have ended.

“Governance versus governments” played out in the title of Action Line C1. In the 2003 Geneva Plan of Action, C1 had the title of “The role of governments and all stakeholders in the promotion of ICTs for development”. Two years later, the 2005 Tunis Agenda, which was approved by heads of state, changed the title to “The role of public governance authorities and all stakeholders in the promotion of ICTs for development”. Queue major push by some governments at the May MPP to roll back to the earlier WSIS document, which referred to their preferred “government” reference. As pointed out by the MPP Chair, the standard method is to use language from the most recent document (resolution, etc.) and not roll back to previous documents. Other participants pointed out that the lower level folk at the MPP had no right to change the use of language agreed to by heads of state. There was agreement in the end to keep using the Tunis Agenda text, but the issue also played out in references to “stakeholders” (“in their respective roles in responsibilities”, etc.).

The gender equality issue I can’t actually talk about yet. I’m still too frustrated that, in the 21st century, some governments can continue to object to language that aims to overcome massive gender inequalities that still exist all over the world. I will blog about that on a separate occasion.

Action Line C5, Building confidence and security in the use of ICTs, was where different government perspectives on ICTs and security played out. As with Internet governance, some prefer to promote the opportunities the Internet provides while others are more concerned about the risks it poses (and the need for governments to take the lead in reducing these risks). Similarly, this May MPP meeting reflected differences between those wanting to concentrate on the role of governments and intergovernmental organizations in addressing the risks of ICTs (including cybercrime) and those wanting to include non-government stakeholders in the effort to address both confidence and security issues in ICT.

In summary, the following text in the WSIS+10 draft Vision document (1 June version here) had no consensus:

A number of suggestions were made about how to deal with the inability to find consensus on any form of compromise text. All of them involved sending some form of the WSIS+10 Vision document to the HLE. Options proposed were:

Please note that I was watching the meeting remotely, and it was well after 5 am in the morning for me by the time this discussion was at its peak, so there may have been other options that I missed as I struggled to stay awake.

Participants were flipping back and forth on what to do. Sometimes a government representative would make an intervention supporting one option, then later support another one. It was very late on Saturday night and everyone was very confused, very cranky and many stated they while they were being “very flexible”, those supporting the opposite view on an issue were not being as flexible as they should be. Sweden, in particular, spent a lot of Saturday making interventions while looking like this: 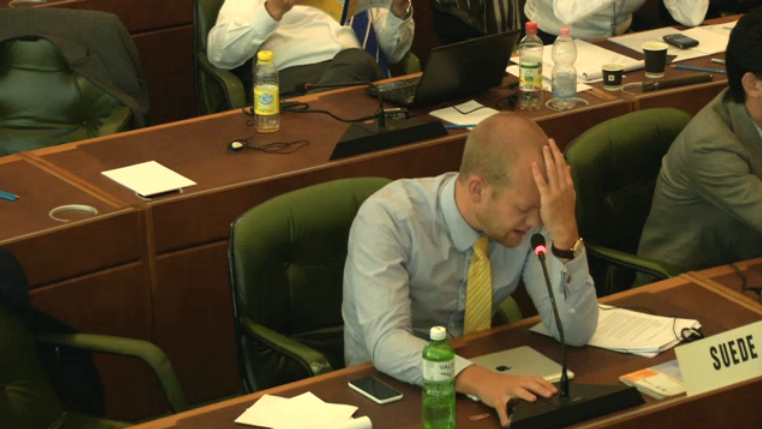 The MPP Chair at one point suggested that there needed to be yet another MPP just before the HLE itself. The room spontaneously erupted with cries of “No!” from the delegates. Towards the end of the meeting, with there being no agreement on what form the non-consensus items should appear in if included in the WSIS+10 Vision document sent to the HLE, a lot of the participants seemed to coalesce around the option of “No Action Line text at all to appear in the Vision document to go to the HLE. Put it in the Chair’s report instead”. Others still very much wished for there to at least be the consensus items in the document to go to the HLE. A few States reminded some of those “keep the consensus Action Lines text” supporters that they had earlier insisted on a “nothing is agreed until everything is agreed” approach, and since not everything was agreed, then none of the Action Lines text was agreed. (Be careful when you invoke hardball negotiation tactics as they may later be used against you.)

In the second part of this two-part post on WSIS+10, I’ll talk about the newly-added sixth MPP that will be held next Monday, 9 June.

[3] The printed copy of WSIS Geneva and Tunis outcome documents has a mostly blue colour, so has been frequently referred to as the “blue book”. Australia, however, jokingly referred to it as her “blue bible” in the fifth MPP. After that, most delegates also began referring to it as “the blue bible”.