Note: I attended the fourth CWG-Internet meeting as a member of the Australian delegation; however, any of the views I express in this blog post are entirely my own. This post does not reflect the official Australian position, nor is its content endorsed in any way by the Australian government. 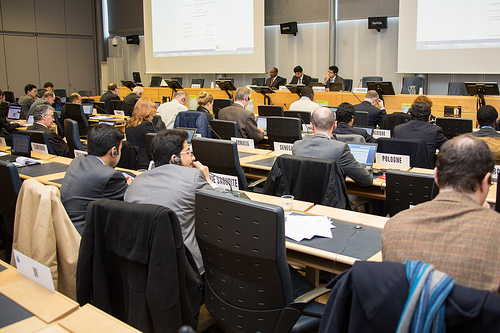 The fourth meeting of the ITU Council Working Group on International Internet-related Public Policy Issues (CWG-Internet), held 3-4 March 2014, was a bit of an anticlimax after the very spirited five-day CSTD Working Group on Enhanced Cooperation (WGEC) meeting held the previous week. It seemed that everyone had lost the will to discuss the Internet. Even the Member States keen for a new intergovernmental Internet policy mechanism seemed off their game.

This was the final CWG-Internet meeting before the ITU 2014 Plenipotentiary Conference (PP-14) begins in October. PP-14 will decide the future programs and activities for the Union for the years 2015 to 2018. This includes the future direction of the CWG-Internet. Yet there wasn’t a single contribution to this CWG-Internet meeting proposing how the CWG could or should continue its work after 2014. Of course, the CWG itself can’t decide its work program, but it could have made suggestions on what the group members think is needed and included those suggestions in the CWG-Internet Chair’s report for consideration at the ITU Council meeting in May, and subsequently at PP-14 in October. Instead, the CWG kind of just… floundered…. for its first day, then finished its second day well before noon, having spent the morning finalizing the contents of the 1300 word Chair’s report of the first day.

One of the more colourful Member State representatives—from a Member State that hadn’t submitted any contributions for the meeting—expressed frustration about the lack of progress the CWG seemed to be making. Others also said that there needed to be discussion about the way forward for the CWG. But the fact is that not a single one of these States had taken the time to contribute anything formal to the CWG on possible future directions for the group.

It was all rather odd. Were the frustrated Member States hoping that someone else would do the heavy lifting for them? Was the concerned posturing during the meeting a half-hearted practice run for Internet-related negotiations at the main event, PP-14? Or has CWG-Internet been sidelined by other events and proposals in the Internet governance sphere, including the much-hyped NETmundial in April? Is it simply Internet governance fatigue? Have Member States who’ve been wanting an alternative to the current Internet governance ecosystem, and been forum shopping amongst a growing number of UN bodies, finally reached the same stage of discussion fatigue that those of us who follow the existing Internet ecosystem discussions and the increasing number of UN body discussions have long felt? Are there just far too many big ITU meetings this year and it’s proving difficult to devote time and energy to them all? Frankly, I suspect it’s a bit of all of these things. I guess we have to wait until the next CWG-Internet meeting-if PP-14 resolves to continue the group-to find out whether CWG can wake from its current slumber.

Informal discussions on where the CWG-Internet should go from here

Because there were no formal contributions outlining ways for the CWG to move forward, there couldn’t be any consensus agreements made on the future of the CWG-Internet. But the informal discussions that occurred do perhaps foreshadow more formal proposals for the CWG-Internet’s future activities that may emerge in the lead-up to PP-14. Therefore, I have included a brief summary of those discussions below:

Finally, some musings on the meeting’s participants

There were very few representatives from the Member States that would very much benefit from experience sharing with other States on how to help support Internet development within their borders. In particular, there were only one or two Member States from the African region, and apart from India, none of the developing States from the Asia Pacific region. Latin American and the Caribbean was also poorly represented (Paraguay was present). Instead, the meeting was limited to active participation by Saudi Arabia and Bahrain from the Middle East, Japan, India, Iran and Australia from the Asia Pacific, the USA and Canada from North America and Sweden, UK, Russia, Germany, Poland and Bulgaria from Europe. In other words, the usual suspects, with the usual positions, said the usual things to each other in yet another venue discussing Internet issues.

Is the lack of participation by others a sign of the lack of relevance of the CWG-Internet to their real world needs? Or is the lack of participation a sign of resource constraints preventing developing countries from attending the meeting? ITU does provide fellowships for developing countries, so if non-Geneva based delegates wished to attend, there were some funds available to cover travel costs. This, of course, doesn’t address the issue of limited human resource capacities, and some Member States simply can’t afford to lose a valuable member of their department while they spend a couple of weeks sitting in meetings in Geneva unless they’re certain something of value will come of it. I suspect that lack of relevance played a big part in the lack of participation at this meeting, as the CWG-Internet took place in the same room as earlier CWG meetings, and there were around twice the number of country flags in the room as there were countries represented at the CWG-Internet. Clearly, a lot of the countries felt there wasn’t any need to stay on for the CWG-Internet discussions.

It was also clear that a number of people in the room had very little real understanding of the Internet and ICTs. Many of the same people who attend CWG-Internet meetings are the exact same people who’ve been attending ITU meetings since before the days of the Internet. They’re radio folk, satellite folk, telephone folk, or diplomats from missions in Geneva with a wide portfolio of issues to cover, of which the Internet is just one of many competing for their attention. I understand the need to have experienced diplomats and veterans of the ITU discussing Internet-related issues in intergovernmental spheres, but I also think it would help discussions substantially if those diplomats could bring with them an advisor who understands Internet issues at a level deeper than “I can use the Google”.

2 thoughts on “Is CWG-Internet terminally ill or temporarily comatose?”