Day 1 was the day of blue peacekeeper’s helmet. Day 2, though, is turning out to be the day of rolling up the sleeves as delegates dive into discussions on the Opinions about multi-stakeholderism and enhanced cooperation.

For those who weren’t there, below is a brief summary of the first day and a half of the World Telecommunication/ICT Policy Forum 2013 (WTPF-13). 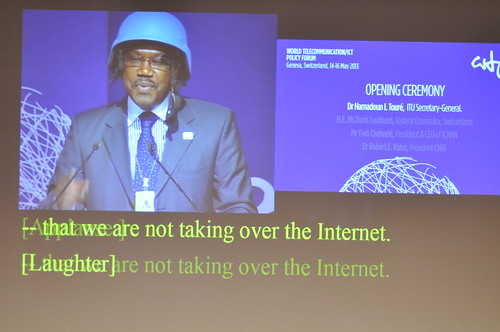 Day 1: The blue helmet of friendship

Whether it was a demonstration of the ITU Secretary-General’s own media savvy, or the result of an ITU media staff brainstorming session, the image of Secretary General Toure donning a peacekeeper’s pastel blue hard hat is sure to be the defining moment of the Forum. Why the blue helment? To reinforce his sincerity when making the following announcement:

During the conference itself, there was a great deal of concern that ITU and the United Nations was trying to take control of the Internet. Let me announce you today it is my pleasure to announce today —

— that we are not taking over the Internet.

Given the very bitter taste left in a lot of people’s mouths after WCIT-12 last December, Toure’s light-hearted approach to bridge building was probably the right way to go.

This is the sort of thing the Internet Governance Forum (IGF) deliberately avoids. For a newcomer, two hours of ITU Members giving prepared speeches that are (sometimes rather tangentially related) responses to the Secretary General’s WTPF report can seem like a mind-numbing exercise. But it is actually very valuable . It’s a preview of what all the players will be fighting for during the week. For example:

Copies of the speeches submitted to the ITU Secretariat are available from WTPF-13: Speakers and Statements. Note, however, that the official submissions and what was said on the floor aren’t always a match. Some speakers went off script, preferring to wing it in the heat of the moment.

These were the two least controversial Opinions of the Forum, so it’s no surprise that both reached consensus within an hour. The majority of comments made in the room were to express a preference for no changes to the existing text of the draft Opinions. The reasoning given for this preference was that the Informal Experts Group (IEG), which was multistakeholder in composition, had already worked hard to develop consensus on the draft Opinions and that no positive outcome could be achieved by trying to renegotiate a new consensus in the short time available during WTPF-13 in Geneva.

There was a slightly surreal discussion whether it was necessary to exclude stakeholder participation in irrelevant forums by specifically adding mention of their attendance at relevant forums. This was prompted by Turkey’s proposal to include the word “relevant” in Opinion 2:

To continue to work, as appropriate, in the activities of ITU, and in all relevant international, regional and national forums considering[…]

Sweden hopped on board:

Sweden: […] We have listened with interest to the interventions. And we also heard statements that administrations, sector members and all stakeholders participate in the relevant meetings; they don’t participate in irrelevant meetings. And taking that into account, we believe that it’s not necessary to add the word “relevant” to this draft opinion.

Turkey reaffirmed their commitment to including “relevant”, though, and in the absence of any strong objections to including a word that didn’t materially change the meaning of the Opinion, the word was added to the final version of the Opinion.

Day 2: An even speedier Working Group 2

There is a long and contentious history of discussions on the ITU’s role in IP addressing issues. It was with great surprise, therefore, that it took less than 30 minutes for the Working Group to adopt both the text of both Opinions unchanged. Once again, the main reason delegates used to support the existing draft Opinion texts was a belief that the consensus developed by the IEG should be respected.

Then we hit the speed bump otherwise known as Working Group 3.

This was always going to be the liveliest Working Group. Its task is to discuss:

Like it or not, enhanced cooperation is the hottest topic in the Internet governance world right now. It almost derailed the work of the CSTD Working Group on IGF Improvements in 2011. It almost derailed the drafting of the Draft resolution on Assessment of the progress made in the implementation of and follow-up to the outcomes of the World Summit on the Information Society during the 15th CSTD session in May last year. Composition of the new CSTD Working Group on Enhanced Cooperation has also proved contentious.

Fundamentally, at issue in Working Group 3 are proposals to:

A number of delegates, as in Working Groups 1 and 2, object to any text changes on the basis that the IEG consensus text should be respected. There have been a number of statements from States supporting the IEG consensus text that the reasons behind the various proposed changes are already addressed in the existing text. There have been suggestions that to open up discussion on the draft Opinion would not lead to any consensus on a new version in the short time available during the Geneva meeting. The authors of the proposals, however, were very much concerned that the reasons behinds their proposed changes still needed to be addressed.

The “go with the IEG text” reasoning, however, seemed to be winning over the room for a while this morning. Then Chile stepped in. It stated that was not possible for some States to attend the IEG meetings and participate in the development of the draft Opinions. If the IEG consensus texts were adopted as the final Opinions, it was effectively barring the input of those States who had come to Geneva to participate in the drafting, but hadn’t been able to attend the IEG meetings. Other countries, including Mexico and Argentina, also supported this view.

The Chair pointed out that remote participation had been possible, even if physical attendance had been out of the question for some members. Haiti asked why WTPF was being held if all the decisions about the text of the Opinions had been decided in the IEG meetings. Bahrain suggested that WG3 would be a good place to enable discussion on the views of those who hadn’t attended IEG meetings. India then suggested going through the text of Opinion 6, paragraph by paragraph, amendment by amendment, on screen. At this point, we were heading into the lunch break.

The current state of play is that anyone who spoke on the floor this morning has been asked to send their proposals to the Working Group Chair. An informal meeting during the lunch hour was meant to thrash out how to proceed with the proposed changes to Opinion 6.

The afternoon session is about to begin any moment now…